Dedicated community leaders, authors, non-profit directors, law enforcement trainers, and educators from across the country gathered at The Inn at Villanova on April 11-12 for a two-day conference.

The thread that brought them together was that they were all survivors of commercial sexual exploitation, and for the past several decades, each of them has turned their trauma and horrific experiences into advocacy and leadership in their own communities.

“Survivors are part of the conversation. They have a tremendous amount of knowledge and should be respected. Survivors are our best teachers; they help us become better lawyers,” says Shea Rhodes, Esq, CSE director.

According to Audrey Morrissey, one of the program directors of My Life My Choice, a Boston-based program that empowers vulnerable at-risk children, “at first we were exploited, and felt our only worth was telling and re-telling our stories - regurgitating a crime. We were the ‘victims.’ As we healed, we transformed our energy into a positive direction, becoming policy-makers.”

As accomplished as these sexually exploited survivors have become, the trauma of their past lives results in mental health issues that can plague them from time to time. Leading a conference such as this takes courage and grit. Enveloped for two days in subject matter that was their past, they must remain laser focused on what is their “now” reality.

“No one has the right to buy or sell people - especially children,” says one survivor, who was sold by her family into trafficking at a young age. “While some young teens grow up wanting things - nice jeans, friends, dates, I grew up wanting freedom.” 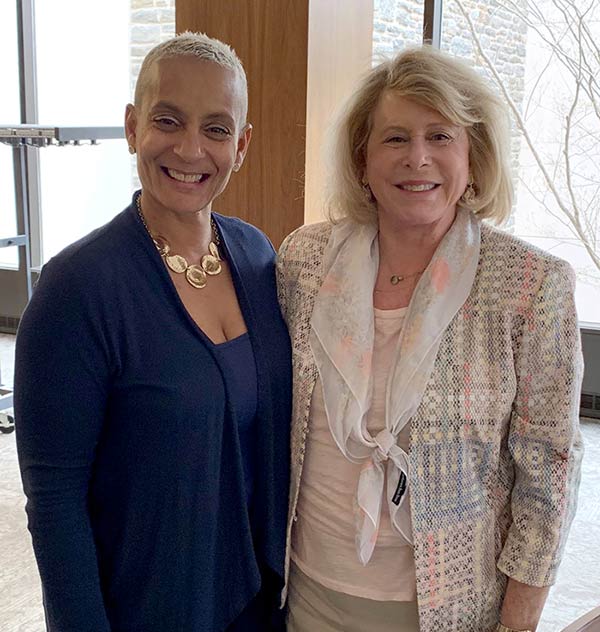 Audrey Morrissey, a program director for My Life My Choice, a Boston-based program that empowers vulnerable at-risk children, with Carole Landis of the Carole Landis Foundation. Morrissey uses her experience as a survivor of commercial sexual exploitation to effect policy change.