Jewish Federation Jewish Community Relations Council and the Anti-Defamation League of Eastern Pennsylvania joined forces in Harrisburg to help influence legislators in passing (or not supporting) multiple bills that were on the floor and soon to be voted on in four major categories.

As lay leaders we were prepared with white papers and backgrounders to share with the different legislators we privately spoke with. My group sat at a round table with PA State Representative and House Speaker Mike Turzai. We discussed nine bills in four categories that we did or did not support.

The Pennsylvania Fairness Act; Non-discrimination: We support HB1410 which would update the Human Relations Act, originally written in 1955, by prohibiting discrimination on the basis of sexual orientation and gender identity or expression. Today, in PA, gay and transgender people can be fired, evicted, and turned away from a job/business simply because of who they are and who they love.

The Jewish Federation JCRC has a long history of advocating for expanding and strengthening food assistance programs to alleviate hunger. Over 600,000 people in the Philadelphia five-county region currently receive SNAP benefits. We do not support these bills as they make applying for benefits problematic because it puts an additional burden on custodial parents including legal fees to create these agreements and time it takes to create such an agreement - benefits are denied while the matter is settled in court.

House Bill 505: An Act amending the offense of ethnic intimidation. This bill would expand protected categories under the state's hate crime statute to also include mental or physical disability, sexual orientation, gender, and gender identity. Pennsylvania is the only state in the tri-state area that does not protect all of its citizens under hate crimes legislation. 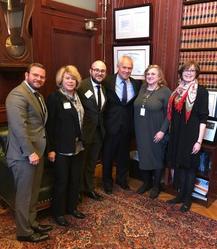